About UsMemories, documents, recordings and photographs of the history of Pilton

The Pilton Story project all started in 2009 at a community meeting in Pilton Church Hall where local people could bend the ears of our councillors, officials and police about law and order, litter, street cleaning, planning and the like. Some ticked a survey box marked 'heritage' and the ball was rolling. Local journalist Richard Howe had already hoped to establish an oral archive and talk to old Piltonians about the history of the village and their memories.

The encouragement of Alison Mills (North Devon Museum Service) and Councillors Brian Greenslade and Mair Manuel spurred him on to gather together a small group - Margaret Reed, Richard Stevens, Pip and Mark Cartmell and Clea Curtis - to think about starting a wider heritage project. The idea expanded to include a photo archive, a website, an architectural study, a new mural, and a drama sequence of local stories to play at Pilton Festival time in July. It all sounded grand and exciting. We asked the Church Hall Committee if we could use a room on the upper floor to house a collection of photos, recordings, documents and to keep a computer and other equipment to show off the project. They said yes even though it meant shifting a ton of equipment owned by the Pilton Scouts, Cubs and Festival, to whom we are grateful. We started thinking about the drama project, approached the local schools which were enthusiastic, and even had an architectural team - Peter Ferguson, Ian Snowden and David Wilson - willing to run a built-environment strand to the project. 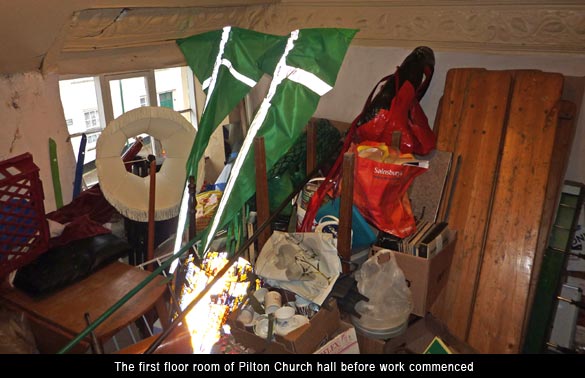 Then we ran into problems with an application to the Heritage Lottery Fund (HLF) for upwards of £30,000 to which North Devon District Council (NDDC) and Pilton Church Hall were going to add. An early headache was when HLF asked who owned the hall, and whether the Committee had a constitution and the necessary policies in place. Well, some confusion reigned and it took the best part of a year to establish that, contrary to general thinking, the Church of England (C of E) actually did own the Hall and that meant bringing everything in line with C of E policies and paperwork. Nevertheless we duly applied and it was all going smoothly with hopes of approval last year. We were grateful to Barnstaple Town Council for giving us our first £500. Then, alas, the HLF said no….. they considered other projects more valuable and it was back to square one.

About this time Martin Haddrill joined the team, along with Pilton Vicar Nigel Dilkes and Church Hall Treasurer Terry Chaplin, and we all felt we should try to carry on with the project and to fund it, if necessary, piece meal, mostly through confirmation of the promise of a still very significant grant of £6,000 from the NDDC councillors. Martin took on the project management and applied great determination and skill to directing operations, drawing up plans, co-ordinating our efforts, specifying and procuring everything, painting and decorating, and making it happen. What's more, NDDC came up with a further £1,000 specifically for development of this website and the database of information which sits behind it as the key elements of the project for getting the story out there. Between October 2011 and March 2012, the upstairs room in the 16th Century building which stands the front of the Edwardian Pilton Church Hall (built about 1905 to replace a skittle alley) has been cleared, repaired and decorated and given electricity, heating and a telephone line. The refurbishment included uncovering a beautiful plaster frieze which probably dates from that earlier century. Right in the heart of the village, it makes a great base for The Pilton Story. 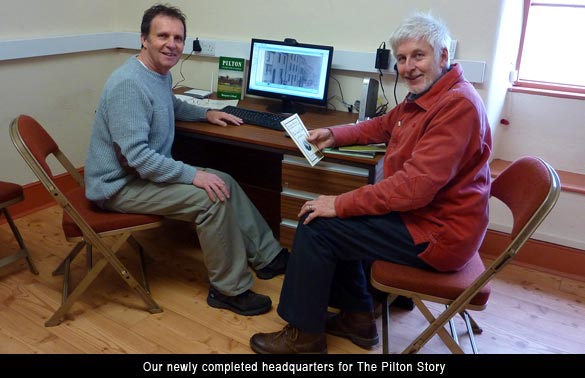 The Pilton Story is a member of the Community Archives and Heritage Group, the national directory of community archives set up to support and promote community archives in the UK. For more information visit their website at http://www.communityarchives.org.uk. We hope that we can both learn from their experience and provide feedback from The Pilton Story to help others.

We would like to take this opportunity to thank Barnstaple Auctions Ltd who kindly donated and helpfully delivered a desk for the Pilton Story office in Pilton Church Hall.