A History of PiltonA historic suburb of Barnstaple, North Devon.

Pilton is sited north-east of Barnstaple, bounded on the south by the River Taw, on the east by the River Yeo, and on the west by the parish of Ashford and north by the parishes of Marwood and Shirwell. Near the north-east parish boundary there is a pre-historic univallate hill-fort at Roborough of unknown origin, encompassing an area of 3 to 4 acres.

Close to the historic centre of the settlement an archaeological excavation in the mid 1970s took place north of the Pilton churchyard boundary prior to development of the site for housing. The conclusion was that the site had been occupied continuously from the 11th to the 18th centuries with rural peasant buildings, and had no connection with the Benedictine Priory on the nearby parish church site. One of the purposes of this excavation was to discover if this hill-top at the core of the village was the site of one of the four Saxon burhs - fortified towns or defended sites - set up by King Alfred in the 9th century to protect the county against the Danish invaders. No evidence was found to support that this was the Pilton burh, the site of which remains unknown.

In 1086 the Domesday Survey revealed that Pilton was made up of four estates or manors – Pilton, Pilland, Raleigh and Bradiford & Pottington, which were formerly owned by four different Saxons, but were now owned by a Norman called Drogo, who held a total of 73 manors in Devon. However, it is likely that he merely acted as bailiff to the Bishop of Coutances, uncle to William the Conqueror, who was the real tenant-in-chief to the King.

The Benedictine Priory in Pilton, which was a cell of Malmesbury Abbey, was founded at some time in the 12th century, centred on the church and churchyard at the head of the main street. After the Reformation the domestic buildings of the priory were demolished, which is evident by the scars on the outer north and east walls of the church.

In 1344 a Fair and Market were granted to Pilton by Edward III, but within four years the Black Death eclipsed all thoughts of trade, with an estimated half the population dying across the country. The plague returned in 1361 to decimate the population still further.

During the 17th century Pilton Church was damaged by the Royalists, who partly demolished the tower to remove the bells and lead spire, taking them to Cornwall to be made into desperately needed cannon and lead shot.

The main trade in Pilton throughout the late medieval and early modern periods was wool stapling and weaving, later supplanted by glove-making, although agriculture remained important, and latterly ship-building on the River Yeo, lime-burning and brick and pottery manufacture became a feature in the Pottington area. Gradually the nearness of Barnstaple resulted in closer ties in employment, with factories opening in the 19th and 20th centuries manufacturing high class furniture at Shapland & Petter and lace at the far end of Vicarage Street. 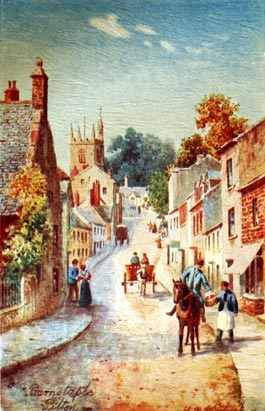 Pilton’s ecclesiastical parish has been halved for civic reasons, with the densely populated eastern part taken into Barnstaple, while the rural part to the west, north and east remains as Pilton West. From a population of approximately 750 in 1575, Pilton now has approximately 4,000 inhabitants.

For the comprehensive history of Pilton you should read Margaret Reed's excellent book 'Pilton Its Past and Its People' published by The Vineyard Press (ISBN 0 9510192 1 X), which can be ordered from a number of online outlets. Search for the book by clicking here.